Lymphatics collect tissue fluid throughout the body including the extremities and return it to the large veins near the heart. The lymph represents fluid that originates as the circulation passes through the tissues. The lymph passes through filtering sites called lymph nodes along the way back to the heart. Lymphedema refers to swelling in an extremity due to the failure to drain away the volume of lymph being formed in the extremity. It can result from an abnormal increase in the amount of tissue fluid or from a decrease in the number/efficiency of lymph vessels. 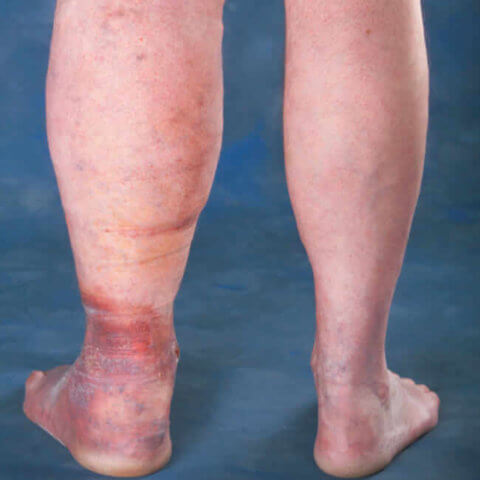 signify how gross the limb can become. It is important to distinguish lymphedema as the cause of swelling from swelling due to venous disease because the management and the outlook is different for the two problems. When lymphedema becomes severe it can be complicated by infection and ulceration of the leg—at this stage it becomes a disabling condition.

Lymphedema can be primary or acquired:

Many degrees of lymphedema are seen in problems that affect the lower extremities. Sometimes it is a reversible condition and other times it is a permanent problem that will require lifelong management. Diagnosis is made by your physician from the appearance of the extremity and confirmed by a series of tests that show there are no other causes for the swelling to be there.

Chronic lymphedema can be difficult to control. Swollen limbs become vulnerable to infection. Any injury to the skin, such as a cut, scratch, insect bite, or even athlete’s foot can cause a severe infection, which physicians call cellulitis or lymphangitis. Lymphangitis appears as red streaks running up the inside of the leg and thigh and is usually accompanied by a painful swollen leg with fever and chills. It results in the destruction of existing lymphatic channels and intensifies the inadequacy of lymphatic channels that is the basic cause of the lymphedema condition. As swelling becomes worse, the tissues in the leg become hardened, and the swelling becomes ‘fixed’. This is called fibrosis, a characteristic of advanced chronic lymphedema.