For over 50 years Kistner Vein Clinic has been a leader in treating people with venous disorders within Oahu, Hawaii. Our founder, Robert Kistner, has published over 120 scientific papers on the treatment of varicose vein surgery, spider veins, and other complicated venous disorders that has helped advance the ways these conditions are treated. We take great pride in continuing this pursuit of scientific knowledge and real hands on patient experience.

About Us
Varicose Veins

Over 25% of the population are affected by bulging and often painful veins that are easily visible to the naked eye. They often get worse over time, and may also include spider veins that appear in or around the area. You may have one or both types of venous disorders, along with the following physical symptoms.

Our vascular surgeons are specifically trained in clearing up such conditions, and can help you relieve pain, or unsightly enlarged veins. 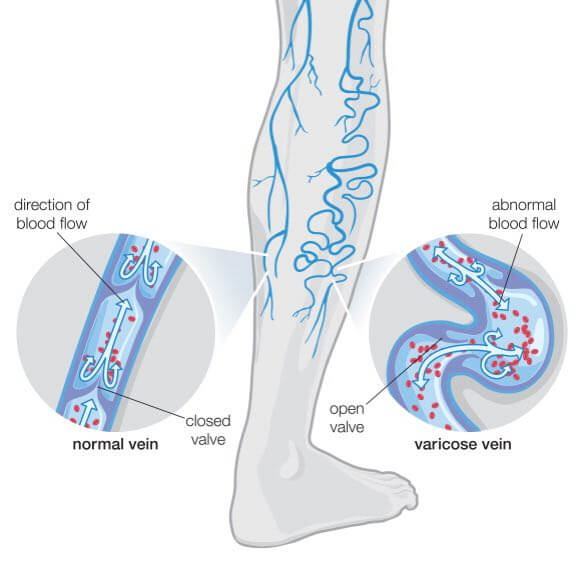 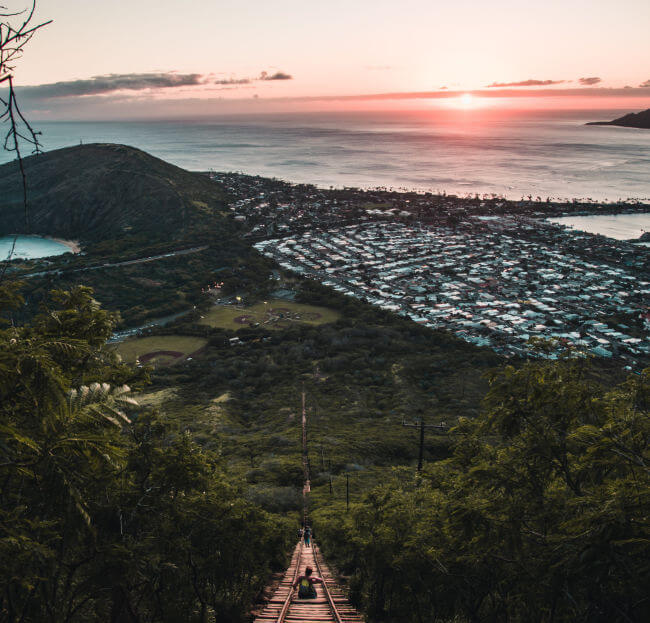 We have been practicing and helping patients in Oahu, Hawaii for over 33 years. We are located just off of Highway 1 on Beretania St., and minutes from Thomas Square Park.

It is recommended that all prospectives patients schedule a  consultation with one of our trained physicians to evaluate potential vein disorders or complications with such a condition.

What is the role of the veins in the circulation?

What is the cause of spider veins?

The cause of spider veins is unknown. They are so common that nearly everyone knows someone in the family who has had them. They are more prevalent in women but occur in men as well. They can appear locally after trauma or after superficial surgery, even after vein surgery. We do not know how to prevent them. The advice to avoid crossing the legs or wearing constricting clothing or garters to prevent them has no established basis. The hope that support stockings and dietary supplements are of help is unsubstantiated.

What are varicose veins?

Varicose veins are dilated tortuous (twisting) veins with weakened walls and valves that no longer close effectively when they should. They occur mainly in the lower extremities and are important for the health of the skin and superficial tissues.

They first appear as bulges under the skin of the erect individual and disappear when the limb is elevated above the heart. They can develop over a period that ranges anywhere from 2 years to 30 or 40 years. As these changes occur the person may experience variable symptoms like heaviness, itching, tingling, burning, night cramps, and even swelling of the leg.  Varicose veins are signs that there is an underlying venous insufficiency that can lead to symptoms that affect one’s quality of life.

What is a healthy vein valve?

The valves are strong but delicate structures inside the veins of the extremities whose function is to direct the flow of blood like a policeman directs traffic. They cause the blood to flow from every cell in the body by a direct route back to the heart and central organs. In the legs the valves direct the blood from the foot to the heart by closing the blood flow behind the flowing stream which prevents reverse flow in any given vein, even against gravity. In general, they direct flow from the skin and outer parts of the body to the core where the heart is located. If the valves fail to work properly in the leg veins when the individual is standing and sitting with the legs dependent, the blood flows back and forth in two directions, and the system no longer functions properly. This leads to congestion in the legs with heaviness, swelling, and even inflammation over time.

What is a venous ucler?

A chronic venous ulcer (non-healing sore) in the skin refers to a site on the lower leg or ankle where the normal skin covering has been destroyed by an inflammatory process and the (subcutaneous) tissue under the skin shows through. In the leg between the knee and the foot the most common cause of these ulcers is leaking venous valves or obstructed central veins causing high pressure and abnormal circulation in the tiny vessels of the skin. Ulcers represent a late stage of lower extremity vein disease when the abnormal circulation from long-standing reflux or blockage in the veins causes the skin to become thickened and inflamed, and it actually breaks down into an open sore.

What are symptoms of blood clots?

Blood clots can occur in any vein in the legs.  They may have no symptoms or they can present as red streak on the skin surface and painful, palpable cord.  They can also present as swelling and pain in one leg.  The symptoms and signs will be different depending on the venous system affected.  The venous system is divided into superficial and deep depending on their locations relative to the fascia.

Who is at risk for blood clots?

Blood clots can happen to anyone. A long travel in a plane or a car can put anyone at increased risk. When there is a period of immobility, blood clots are more likely to form. There is genetic predisposition and genetic disease that put certain people at higher risk for forming clots. Certain form of cancers cause blood to get “thick” and may predispose the patients to blood clots.
Any sudden onset of swelling and pain in one leg warrants a prompt evaluation by a doctor.

What are lymphatics and lymph nodes?

Lymphatics are tiny vessels with tiny valves (like veins) that collect lymph fluid throughout the body and return it to the large central veins near the heart. The lymph is formed by body fluid outside of the blood vessels and it is collected by the very small lymphatic vessels that pass through filtering sites called lymph nodes along the way back to the heart. The lymphatics are very important because they return literally quarts of water each day from the lower legs to the heart, and if they lose their normal function marked swelling will occur.

Lymphedema refers to the swelling in an extremity that occurs from failure of the lymphatics to drain the lymph as it is formed in the extremity.

How will treatment for my venous disorder impact my daily activity?

Venous disorders are frequently a cause of daily discomfort in their various stages of development as described above. In the earlier stages of venous reflux disease, the elimination of certain patterns of vein dilation and valve dysfunction can relieve leg discomfort and fatigue dramatically while it also improves cosmetically unattractive appearance. People often feel healthier and even younger when their legs are treated.

Fortunately, the progression of the venous disease to advanced stages only occurs in a minority of cases, and it develops slowly (over decades) in most instances. When it does progress to later stages the vein dysfunction often becomes complicated by inflammation and progresses through swelling to permanent discoloration, and even further to thick scarred skin and subcutaneous tissue with a danger of, or actual occurrence of ulceration.

Aggressive treatment is necessary for later stages to preserve a normal lifestyle. Scarring and tissue changes can become non-reversible, and a small percentage of individuals are unable to lead a normal life because their leg will not tolerate being dependent due to swelling and ulceration of the tissues.

Treatment is individualized in the Kistner Vein Clinic by directing treatment to the most appropriate effective method for the diagnosed problem. The office treatments are performed on a walk-in and walk-out basis. There is an expectation of near immediate return to customary activity and minimal if any loss of work time for most cases.