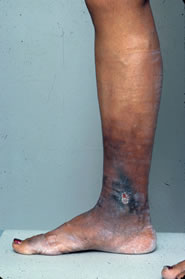 Venous leg ulcers are the ultimate serious problem that happens to individuals with diseased veins of the leg. In fact, leg ulcers are considered to be the last stage of vein disease progression.

They occur in about one in every fifty adults and constitute a serious cause of loss of time from work and have a major impact on the individual’s quality of life. They can be the late effect of both varicose veins and of blood clots in the leg veins. It has been estimated that the cost of caring for a leg ulcer is in the range of $20,000/year, or a total cost in the USA of about one billion dollars per year to the healthcare dollar.

An ulcer (non-healing sore) refers to a place where the normal skin covering has been wiped away and the (subcutaneous) tissue under the skin is exposed. In the leg between the knee and the foot the most common cause of ulcers is leaking venous valves causing high pressure and abnormal circulation in the tiny vessels of the skin. Ulcers represent a late stage of lower extremity vein disease when the abnormal circulation from long-standing reflux in the superficial or other veins causes the skin to become thickened and inflamed and it actually breaks down into an open sore.

Ulcers may affect anyone with abnormal venous mechanics but they are more common in older people and are about equally frequent in men and women. Venous leg ulcers can be painful or painless. Without proper treatment, an ulcer may grow progressively larger until it encircles the leg and causes severe disability for the individual. These ulcers affect industry because they are a major cause of lost work time.

Although vein disease causes the majority (70%) of leg ulcers there are other causes too. For example, poor circulation from narrowed arteries in the leg, problems with nerves that supply the skin, previous severe trauma to the leg are other things that may produce an ulcer. Since the treatment for non-venous ulcers is different from that of venous ulcers it is necessary to do adequate studies to identify the cause of the ulcer in any given case.

The root of the problem is increased pressure of blood in the veins of the lower leg. This causes fluid to ‘ooze out’ of the veins beneath the skin, followed by swelling, thickening, and damage to the skin. The damaged skin may eventually break down to form an ulcer.

The increased pressure of blood in the leg veins is due to blood pooling in the smaller veins next to the skin. This pooling occurs because the valves in the larger veins are damaged by a previous thrombosis (blood clot) causing blockage of the vein, or by weakening of the walls of the veins causing the valves to malfunction, as in varicose veins. When the valves no longer function properly gravity causes blood to backflow down the leg in the erect individual and pool in the lower leg veins. This produces high pressure in the veins which results in damage to the surrounding tissue and ultimately to skin breakdown and ulceration.

Accurate diagnosis in leg ulcers involves identifying the cause of the ulcer and showing the specific veins that are malfunctioning and what is wrong with them. Treatment for all leg ulcers requires carefully prescribed elastic stockings or a form of compression wrap. In addition, many of the problems that cause the ulcers can be repaired by techniques such as injection treatment, minimally invasive elimination of certain veins, or reconstructive surgery in the deep veins. Some of this can be done in the office, and other parts require inpatient hospital procedures. With specific diagnosis and aggressive correction, more than half of leg ulcers can go on to heal.